Create an Account - Increase your productivity, customize your experience, and engage in information you care about.

Basalt began as a railroad town and was known as Aspen Junction until 1895, when the name was changed to Basalt. This name was taken from the basaltic rock formation of Black Mountain (now known as Basalt Mountain) located to the north of the town. The original settlement was actually called Fryingpan Town and was located on the south side of the Fryingpan River, near the old charcoal kilns; portions of which are still visible.

However, in 1887, the railroad established a new town site on the north side of the Fryingpan River, and the residents of the old town relocated to it, leaving the original town that eventually disappeared. Basalt was officially incorporated during the summer of 1901. Since that time, the town has gone through numerous changes and expansions.

History of the Basalt Kilns

The construction of the kilns dates back to the early 1880s, a time of great change and dynamic growth in the Roaring Fork, Fryingpan, and neighboring river valleys. Towns were being formed, prospering, and disappearing throughout the region. Aspen's population was 900 in 1880, and incorporated in 1881. 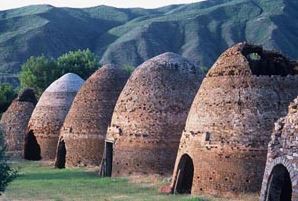 Other towns of this period included Independence, Crystal City, Marble, Ashcroft, and Schofield. In the early 1880s, the lower end of the Fryingpan Valley, which had been within the Ute Reservation, was staked out with mining claims and homesteaders quickly moved into the area near the confluence of the Roaring Fork and Fryingpan Rivers.

Demand for charcoal from smelters in Aspen resulted in the construction of seven kilns in 1882 near the confluence of the Roaring Fork and Fryingpan Rivers. The availability of fuel in the form of Pinion trees was one of the prime reasons for the selection of this site. Horses and mules were used at that time to haul the charcoal produced up to Aspen. A settlement of tents and shacks grew around the kilns which were originally referred to as Fryingpan Kilns. The name was soon changed to Fryingpan, and the community at one time included several tent saloons and a tent store. A halfway house for the stage lines was also built during this period and, along with the kilns, are the only remnants of this early community that exist.

The kilns stand approximately 25 feet tall and 25 feet in diameter. They are constructed of unfired brick and native stone. They appear to have been constructed with standard mortar and were treated with an outside coating for protection from the elements.

The kilns have upper and lower openings typical for this type of processing. It is thought that the two openings were used for ventilation and for the addition of fuel and the removal of the charcoal produced. Similar kilns were also constructed in Aspen, the Crystal Valley, and later at Sellars up the Fryingpan Valley. The ruins of the kilns at Sellars can still be observed; however, the Fryingpan Kilns (remaining largely intact) are the best regional examples of this early industry.

With the development of the railroad and the Colorado Midland Railroad Company, the Town of Aspen Junction was formed in 1887 across the Fryingpan River from the kilns. Aspen Junction was later renamed Basalt, and most of the residents of Fryingpan quickly relocated there. The discovery of coal near Carbondale and the arrival of the railroad allowed the smelters in Aspen to utilize coke from ovens in Cardiff (near Glenwood Springs) and the Crystal River Valley.

The combination of these factors resulted in the disappearance of the early community of Fryingpan and the kilns ceased to operate, In the intervening years the kilns have been used by local ranchers to store machinery and even shelter livestock.

On August 25, 1993 the Fryingpan Kilns at Arbaney Park were designated as a Local Historic Landmark.